Groundwater Protection is Key to a Reliable Water Future 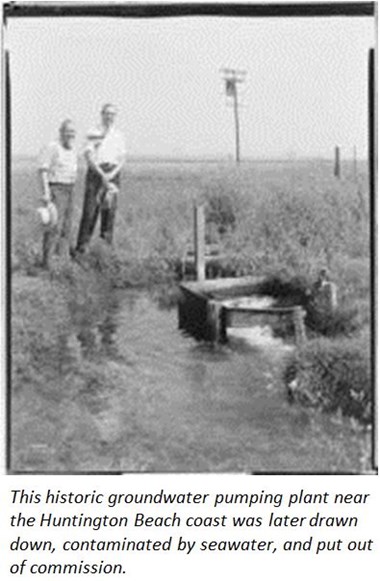 National Groundwater Awareness Week is March 11-17. It is a time to consider the least obvious and, in Orange County, the most important water resource available—the Orange County Groundwater Basin. If you are one of the 2.5 million people living in the Orange County Water District (OCWD; District), you are currently receiving 75 percent of your water supply from this natural underground reservoir.

In many areas, the “out-of-sight, out-of-mind” character of groundwater has produced negative consequences. The most typical problem is basin overdraft where water is removed at rates greater than it’s replaced. This approach is sometimes referred to as “water mining” where extractions continue year in and year out in an unsustainable way. The resulting overdraft can cause the land surface to irreversibly subside and more commonly for wells to run dry. Over the past few years, in California’s Central Valley, farmers have been re-drilling their irrigation wells ever deeper to chase the declining water table. This obviously produces only a short-term benefit.

The agricultural history of Orange County is not much different. As new communities grew at the turn of the century and Orange County farmers battled with farmers upstream for their share of Santa Ana River water, the groundwater levels were chased ever deeper causing the same problems seen in the Central Valley. However, in Orange County, the problem was even worse. Because the aquifers are bordered on one side by the Pacific Ocean, the ever-present threat of seawater intrusion and contamination became real. As groundwater pressure elevations dropped below sea level in Newport Beach and Huntington Beach, farmers began to lose irrigation wells one-after-another. The arrival of saltwater in these historically freshwater wells was a completely predictable consequence of over pumping. Something had to be done.

The concerns of access to Santa Ana River water, sustainable use of groundwater, and the protection of its quality from seawater contamination were bases for establishing OCWD 85 years ago in 1933. Since its founding as one of the nation’s first groundwater management agencies, OCWD has focused on water rights and goals of sustainable water production and water quality protection from the ocean and other pollutants.

The work of OCWD is important and produces tangible benefits for the community. The overall health, economy and prosperity of the area are directly linked to this essential groundwater resource. The scale of the District’s work is large, the costs are significant and the political and economic decisions made by its elected board hold consequences. Sometimes decisions are difficult in the face of opposition. OCWD has never shied away from controversy, beginning with the water rights litigation on the Santa Ana River that took decades to resolve and eventually settled in 1969. Other big issues included the establishment of the world’s first seawater intrusion barrier using reclaimed wastewater from Water Factory 21, which came online in 1976. The most recent and most famous example of innovative management was the construction of the 100 million gallons per day Groundwater Replenishment System (GWRS). That landmark project is now celebrating its 10th anniversary.

The list of innovations and projects is too long to mention here. However, you can be sure that controversial and aggressive ideas will continue to be put forward for consideration. A few of today’s high-profile considerations include bringing polluters to account for their legacy groundwater impacts in both the north and south basins and the public consideration of ocean desalination as a possible answer to water supply reliability in these days of declining supplies and increased competition for imported water.