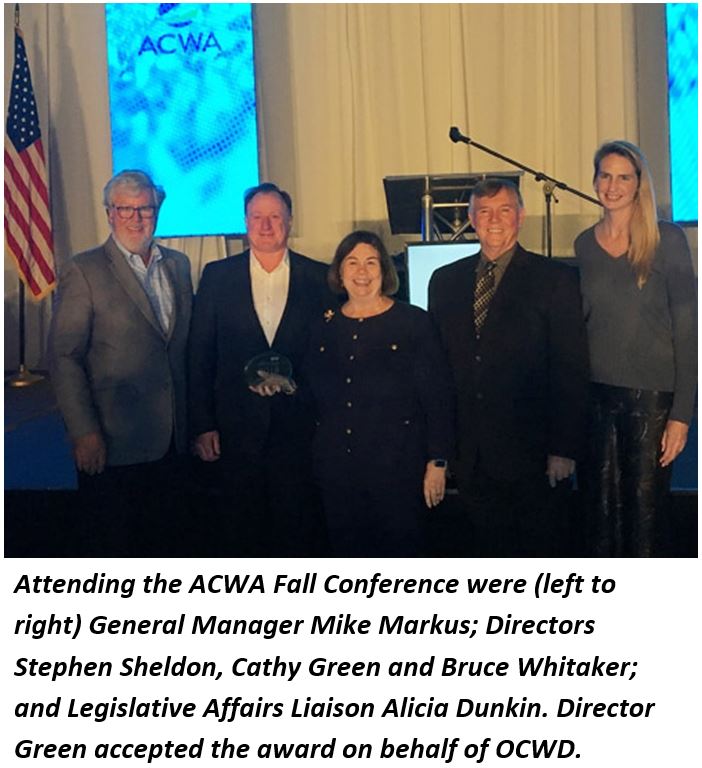 The Orange County Water District (OCWD; District) was honored with the 2018 Huell Howser Best in Blue Award from the Association of California Water Agencies (ACWA) for the Groundwater Replenishment System (GWRS) Bottled Water Campaign. The award was presented at the annual ACWA Fall Conference, which took place in San Diego, Calif.

The Huell Howser Best in Blue Award recognizes outstanding achievements by public water agencies in communicating with customers, legislators, media, the public, and others. The award is named in honor of Huell Howser the television personality best known for his series “California Gold,” which explored the natural, cultural and historical features of California.

“This is a special honor for us because Huell Howser put the Groundwater Replenishment System on the map,” stated OCWD Board Member Cathy Green. “He came to the Fountain Valley facility when it was in demonstration mode, spent an entire day exploring all that was involved in making high-quality purified water from wastewater, and he drank the product water on camera ending with a hearty ‘Oh Boy’ of approval. Having such a prestigious, well-liked and trusted personality, as Huell was, went far to give our project a stamp of approval.”

The GWRS Bottled Water Campaign was created to help the public move past the perceived “yuck factor” of drinking advanced purified wastewater and to generate support for similar recycled water projects. It was comprised of programs and events tailored to reach numerous audiences and was made possible when legislation was enacted in 2017 that permitted the bottling of GWRS water.

In 2016, OCWD, Orange County Sanitation District (OCSD), and WateReuse California led efforts to pass AB 2022, which allows the bottling of advanced purified water for educational purposes. In 2017, OCWD and OCSD became the first to bottle such water in the Western Hemisphere.

OCWD worked together with OCSD and Dick Jones Communications to draft a communications plan for the campaign and to help execute many of the activities. There were four primary campaign events: the GWRS Bottled Recycled Water launch; the #GetOverIt! challenge for media and social media influencers to taste GWRS water and report about it; the Winter Fest community party to celebrate the GWRS 10th Anniversary; and the Guinness World Records™ attempt to recycle the most wastewater to drinking water in 24 hours. Primary campaign tools included the bottled water, a website, a custom media kit, presentations, event participation, videos, press releases, articles, and the list goes on. The campaign resulted in positive media coverage and increased awareness of and support for water recycling. More than 13,000 bottles of water were distributed and nearly 17,000 people were engaged. Reporters and social media influencers were key to helping the campaign expand its reach.

“The increased visibility from the campaign helped to overcome ‘toilet-to-tap’ misconceptions and gain support of water reuse for future infrastructure and program investments on the public’s behalf,” stated OCWD President Denis Bilodeau. “Staff answered questions, debunked myths and the tasting made believers out of the doubters. The positive discussion of recycled water is now magnified.”