Home / April 2018 / Using Natural Wetlands for the Removal of Nitrogen

Using Natural Wetlands for the Removal of Nitrogen

Schoolchildren are taught that passing water through a wetland pond helps to purify water. What they or very few others understand is why that is true or how it works. 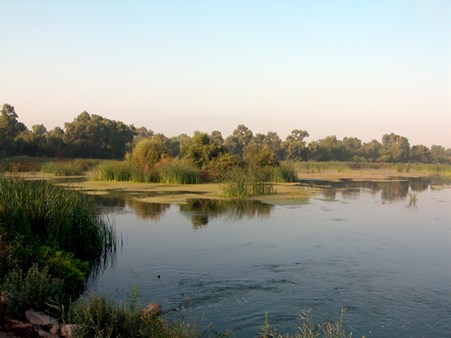 Plants, like other living things, need food, water and air. What better place to take these from than the water passing through a wetland? There you have it, the plants sustain and feed themselves with the things suspended and dissolved in the water. In the end, we have healthy plants and clean water. Not so fast!

Nitrates can get into the water supply due to fertilizer runoff. When it dissolves in water, nitrate is a pollutant known to be harmful to babies and small children. Too much nitrate in their blood interferes with the absorption of oxygen. Nitrogen, by itself, is a perfectly safe, naturally occurring odorless gas that forms about 78 percent of Earth’s atmosphere and is known as one of the building blocks of life. It can be converted into compounds like nitrates, which are introduced to fertilizers.

On one hand, nitrate can be harmful. On the other hand, nitrate stimulates growth in plants. When your lawn is fertilized with nitrates, the grass takes up the released nitrogen and uses it primarily for cell wall development. It uses the nitrogen to form its physical structure only, not for its breathing. When you pull out the lawnmower, cut your grass and take the clippings away you have removed most of the nitrogen along with the plant fiber.

However, that is not what happens in a wetland pond. There, the plants die, fall over and dissolve back into the water releasing their stored nitrates that we know are pollutants. In addition, these wetlands typically contain fertilizer runoff at varying amounts. It sounds bleak, but this is where the cavalry comes in to save the day. In wetlands, there are bacteria in the water that break down the plants’ carbon. These bacteria, like us, need oxygen to digest the dead plant (their carbon food). It’s just like every breath you take is used by your body to digest the hamburger you had for lunch (your carbon food).

How is bacteria’s need for oxygen useful for the removal of dangerous nitrate? Unlike humans, bacteria can do something magical when they run out of oxygen, they can “breathe” nitrate as an alternative. Nitrate has oxygen bound up within itself that the bacteria can turn to when the more easily accessible oxygen in the pond water is gone.

Here’s how it works. The bottom of a wetland pond is filled with decaying plants and the bacteria are busy eating the plants’ carbon, first using available oxygen, creating anaerobic conditions, and then “breathing” the nitrate. After pulling oxygen from the nitrate molecule, bacteria release harmless nitrogen gas, which bubbles up and returns to the atmosphere as non-polluting nitrogen. The cleaner pond water, with its nitrate removed, then percolates into the groundwater basin—a healthy reintroduction to the environment.

So, the unsung and unseen super heroes of the wetland pond are the bacteria. They are doing the work to remove nitrate from water and the plants play the sacrificial role of bacteria food.

To learn more about OCWD’s wetlands and how they are used to restore water quality, read the Prado wetlands fact sheet found at the agency’s online Learning Center.