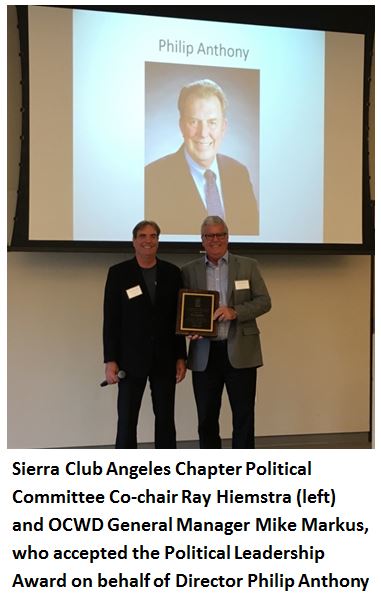 The award ceremony took place at the PAC’s fundraiser at the Huntington Beach Senior Center. OCWD’s General Manager Mike Markus was in attendance and accepted the award on Director Anthony’s behalf.

“I am honored to receive this award and I would like to express my sincere gratitude for the recognition,” said Director Anthony. “I’m a long-time resident of Orange County and have been active in both political and civic leadership for as long as I can remember. It’s been a true pleasure to serve the people of Orange County and I look forward to my continued service,” he added.

Director Anthony has served on OCWD’s board since 1981. He also serves as a director of the National Water Research Institute, commissioner of the Santa Ana Watershed Project Authority, a member of the Groundwater Replenishment System Steering Committee, and was formerly chair of the Association of California Water Agencies Region 10. He co-founded the Water Advisory Committee of Orange County, was a founding member of OCWD’s Groundwater Guardian Team, and has served on the Santa Ana River Flood Protection Agency since 1988.