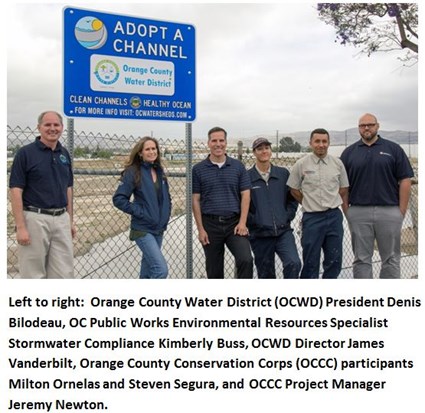 The Orange County Water District (OCWD; the District) has recently joined the County of Orange Adopt A Channel program; adopting an 8-mile section extending approximately from Imperial Highway in Anaheim to Chapman Avenue in the city of Orange.

This area consists of both a 6-mile OCWD-owned portion of the Santa Ana River channel and a 2-mile portion owned by the OC Flood Control District (OCFCD) where OCWD conducts recharge operations—infiltrating Santa Ana River water to the Orange County Groundwater Basin. The groundwater basin supplies 75 percent of the water needs for north and central Orange County.

“The Santa Ana River flood control channel plays an important role in putting water back into the Orange County Groundwater Basin, which OCWD manages,” said Orange County Water District Board President Denis Bilodeau. “It is with civic pride that we joined the Adopt A Channel program to maintain the area’s appearance and help keep harmful debris from injuring wildlife and entering our precious ocean.”

The OCFCD, through OC Public Works, operates and maintains more than 380 miles of regional and sub-regional flood control channels in Orange County. These channels provide a vital service protecting property and life by transporting stormwater runoff to prevent flooding of nearby communities. While they convey stormwater runoff, these channels also collect trash and debris and are subject to graffiti.

The objectives of the Adopt A Chanel program are “to improve the physical appearance of these channels, enhance the environment by removing trash and debris, and to increase awareness and commitment to keep our channels, creeks, bays and ocean clean.”

As an Adopt A Channel program participant, OCWD entered into a contract with the Orange County Conservation Corps (OCCC) to remove graffiti and trash, in the 8-mile section, under the supervision of OC Public Works. The OCCC is a voluntary work and learn program that provides opportunity for at-risk and disadvantaged youths, age 18 to 25. Any issues related to homeless encampments in this area of the flood control channel will continue to be addressed by the County of Orange.

The County of Orange launched the Adopt A Channel program in 2014. It is patterned after Caltrans’ Adopt-A-Highway program.