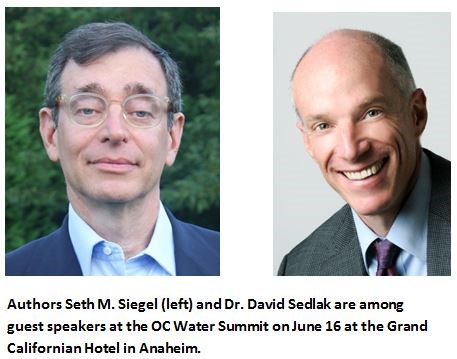 California recently faced more than five years of drought that caused serious land subsidence in the fertile Central Valley and water storage levels in the Orange County Groundwater Basin to decline as low as 18 percent of its operating range. The drought seems to be over for now, but the next one could be just around the corner and the state isn’t yet prepared. We’re rushing to find our next “gold”–new water sources.

This year’s OC Water Summit titled “Finding Water” features a celebrated roster of water experts. NBC4 Weathercaster Fritz Coleman is master of ceremonies. The Summit will take place on Friday, June 16 from 7:30 a.m. to 1:45 p.m. at the Grand Californian Hotel in the Disneyland Resort of Anaheim. Make your reservation now.

Registration is $130. The price goes up to $150 after June 2. Limited discounted tickets are available for college students and teachers.

The program agenda includes topics about managing water after California’s historic drought, finding solutions to address aging infrastructure, probes into the viability of desalination and water reuse as parts of a water portfolio, stormwater capture, and a special luncheon session with Seth M. Siegel, author of “Let There Be Water: Israel’s Solution for a Water Starved World.”

Co-hosted by the Orange County Water District (OCWD), Municipal Water District of Orange County (MWDOC) and the Disneyland Resort, this one-of-a-kind event engages experts and influencers in discussion of new and ongoing water supply challenges, water policy issues, and other important water-related topics that impact our economy and public health.

We thank our following sponsors :