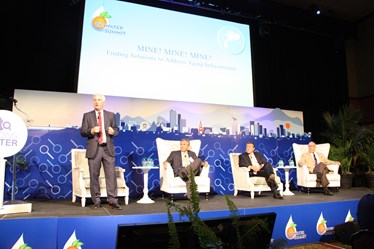 More than 330 met at the Grand Californian Hotel in the Disneyland Resort of Anaheim on June 16 to attend the 10th annual OC Water Summit, titled “Finding Water.” Experts discussed the current rush to find new sources of water in California to overcome the challenges caused by cyclical droughts.

Highlights of the day included Master of Ceremonies Fritz Coleman and his “water forecast” for Southern California, which covered a changing climate, continued arid conditions and cyclical droughts. He colorfully set the scene for six sessions, including the luncheon speaker. Coleman is a celebrated NBC4 weathercaster and standup comedian.

At lunchtime, Seth Siegel, New York Times bestselling author of “Let There Be Water: Israel’s Solution for a Water Starved World,” described how Israel can serve as a role model to help California and the U.S. solve their water shortages. Even though 60 percent of the country of Israel is made of desert, it has found solutions to its water problems through innovative methods and techniques.

Presentations and videos are available at www.ocwatersummit.com/program2017.aspx.