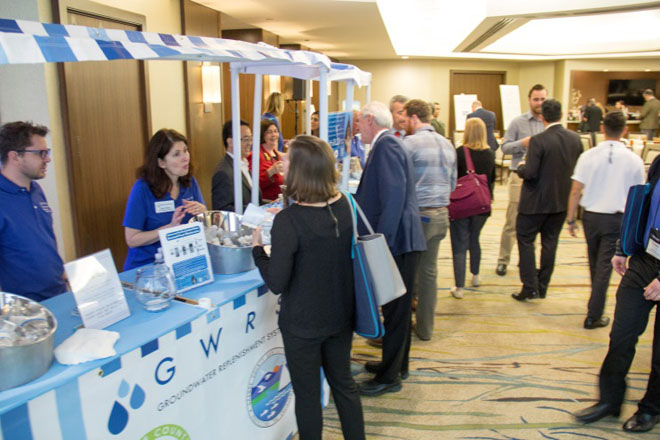 The two agencies, which collaborated to create the Groundwater Replenishment System (GWRS)—the world’s largest advanced water purification project for potable reuse, recently had a limited edition of 16,000 GWRS water bottles made to take on the road and educate the California public, media and policy makers about the benefits of water reuse and to promote reused water for direct potable reuse.

The tour has had “soft openings” at the WateReuse annual conference in San Diego, Earth Day celebration at Downtown Disney in Anaheim and the CoastAlong UCLA sustainability event in Los Angeles. The official tour began June 21 with a special kick-off event in Hollywood. Afterwards, staff will be going on the road to major water industry events, healthy lifestyle and food festivals, and athletic events to enlighten new audiences and prove the GWRS adage, “Tastes like water…because it is water!”

GWRS water was the first reused water to be bottled in the Western Hemisphere following the passage of AB 2022 (Gordon, D-Menlo Park), which went into effect in January. The bill was co-sponsored by OCWD, OCSD and the WateReuse Association California section. The new law allows advanced purified water to be bottled to support educational outreach efforts.

“The GWRS serves as a global model for water reliability,” said OCWD President Denis Bilodeau. “Allowing people to taste the final product can increase widespread acceptance of potable reuse in California where new water sources are critical to augment our needs during cyclical droughts.”

GWRS water is used as a primary source to replenish the Orange County Groundwater Basin, which is managed by OCWD and provides 75 percent of the water supply to 2.4 million people in north and central Orange County. The GWRS takes highly-treated wastewater and purifies it through a three‐step process that includes microfiltration, reverse osmosis and ultraviolet light with hydrogen peroxide. Similar water reuse projects are now seen around the world, but there is still hesitation in some communities here in the United States. “Public understanding of the purity of this water is a key requirement for acceptance,” added Bilodeau. “That is why this tour is so beneficial.”