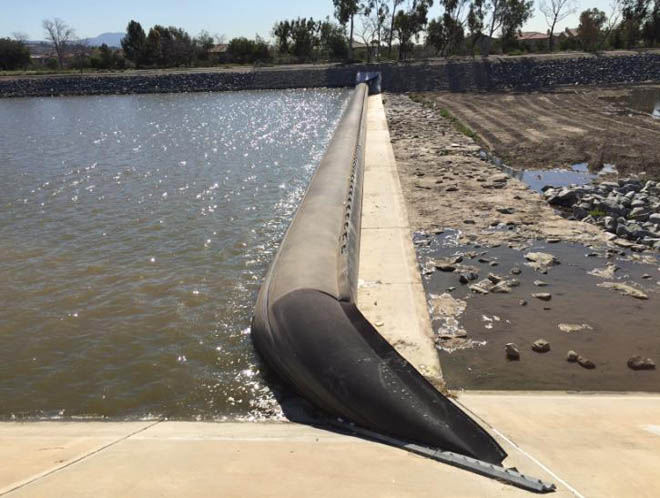 OCWD has constructed a sophisticated recharge system to replenish the groundwater basin. The District constructs earthen levees in the Santa Ana River that evenly spreads water in the river to maximize percolation and operates three rubber dams that divert river flows, including stormwater, to OCWD’s recharge system. The original Imperial Rubber Dam was purchased in 1992. It paid for itself within a few months by diverting water into the recharge system that would have, otherwise, been lost to the ocean. After 20 years in service, that rubber dam was replaced in 2014.

The Five Coves Rubber Dam, installed in 1993, is now scheduled to be replaced beginning October with completion three months thereafter. The Five Coves Rubber Dam is located in the city of Anaheim near the N. Glassell St. and Santa Ana River crossing. The replacement was necessitated when, during the course of regular infrastructure inspections, staff discovered a six-foot long bubble that had formed along the outside of the rubber dam and a crack at the base of the fin in the same area.

The main component of each rubber dam is an inflatable rubber bladder approximately seven feet in diameter by 320 feet in length, weighing 38,000 pounds. OCWD has budgeted $773,300 for this project.