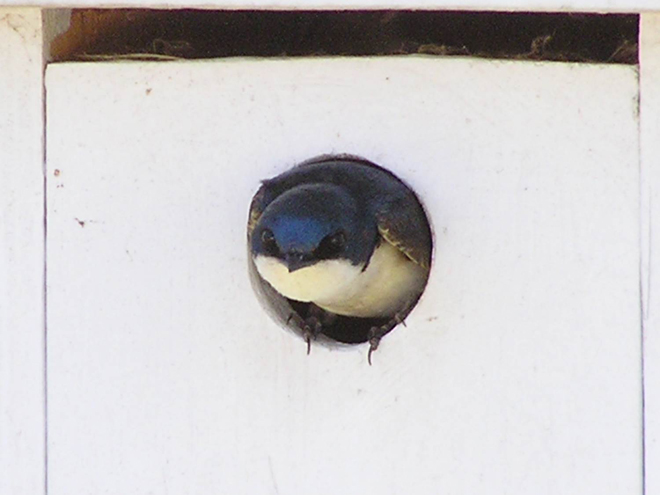 OCWD has more than two dozen recharge basins in the cities of Orange and Anaheim. The water in the basins is “moving”—at least 10 feet a day as it percolates into the groundwater basin. Except for twice a year, when the basins are drained and cleaned to maximize stormwater capture, water is replenished and does remain in the basins. The basins can become breeding locales for pesky midges and mosquitos.

The District implements an effective and safe method of eliminating them. OCWD’s Midge/Mosquito Eradication Program utilizes bird houses as a biological approach to controlling nuisance insects. In 2016, OCWD had 342 boxes placed along the Santa Ana River, and adjacent basins. Of them, 252 boxes were occupied with 925 fledglings produced. Tree Swallows are the primary users of the boxes and they have been documented to eat up to 300,000 flying insects each season per box. Since the project began, OCWD has seen a dramatic drop in midge/mosquito population as well as a drop in complaint calls. For the past four years, the District has had only one call. “Staff experts have applied an environmentally friendly technique to eradicate the pests while safeguarding the quality of the water for consumption,” says Executive Director of Planning and Natural Resources Greg Woodside. “Our year-end program reports are sent to OC Vector because our experience shows that transparency and collaboration make for expanded knowledge for both parties and great relations.”