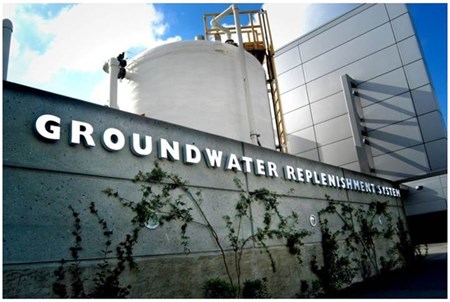 The collaboration between OCWD and the Orange County Sanitation District (OCSD) dates back to the mid 1970s when OCSD provided treated wastewater to OCWD for its Water Factory 21, the first plant in the world to use reverse osmosis to purify wastewater to drinking water standards.

The two agencies then went on to jointly build the Groundwater Replenishment System (GWRS) in 2008. The world’s largest advanced purification facility was expanded in 2015 to produce 100 million gallons of water per day.

Building on nearly 50 years of collaboration, OCWD and OCSD staff recently completed a Joint Exercise of Powers Agreement for the final expansion of the GWRS. Both boards of directors unanimously voted to enter into the agreement, which outlines each agency’s responsibilities for each of the projects that make up the GWRS Final Expansion Project. The agreement also addresses water delivery, water treatment, security, and property leases for the GWRS Final Expansion Project.

Next steps include the District’s pursuit of funding for the project, which includes Proposition 1 grant funding, bonds, and State Revolving Fund loans that typically carry a low interest rate.

When completed, this final phase will bring total GWRS water production to 130 million gallons per day, enough to fulfill the needs of 1 million people in north and central Orange County. In addition, this project allows for OCWD to recycle 100 percent of the reclaimable wastewater produced by OCSD. Budgeted at $351 million, the GWRS Final Expansion is expected to go online by the end of 2022.