The Orange County Water District is a strategist when it comes to water management, with a lot of practice over the past 83 years. It has successfully diversified its water portfolio with the goal of reliability.

OCWD makes decisions that are intended not to see the region through a current drought, but to ensure the availability and security of water supply for the next 40-75 years. Local water agencies in north and central Orange County typically require about 435,000 acre-feet of water annually to meet their needs. About one-third of that demand is currently met through much more costly imported water. The groundwater basin supplies about two-thirds. Of the groundwater supplies, the Groundwater Replenishment System (GWRS), the world largest advanced water purification project for potable reuse, supplies one-third of the basin water. Filling the basin with highly purified water has put us in an enviable position of allowing the 19 water producers in our service area to pump even more groundwater.

During the recent drought, we have realized that the State Water Project and the Colorado River, from which we receive most of our imported water, might not always be realiable. Read More… 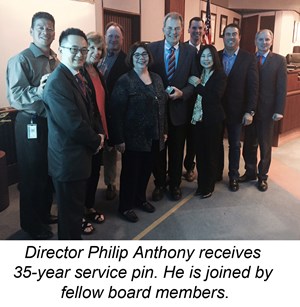 Director Philip Anthony, an elected member of the Orange County Water District (OCWD) Board of Directors since 1981, received his 35-year service pin at the March 16 board meeting. He currently serves as Second Vice President and serves the areas of Los Alamitos and Seal Beach and parts of Buena Park, Cypress, Garden Grove, Huntington Beach, Stanton and Westminster.

For more than 30 years Philip L. Anthony has been a recycled water advocate and has utilized his leadership skills, community outreach efforts, scientific expertise, and knowledge of water reuse to advocate for its worldwide acceptance.

World Water Day, March 22, is an international observance that focuses attention on the importance of freshwater and advocates for the sustainable management of freshwater resources. The United Nations General Assembly designated the first World Water Day in 1993. This year’s theme is “Water and Jobs.” Take this opportunity to learn more about water related issues and be inspired to tell others and to take action to make a difference. 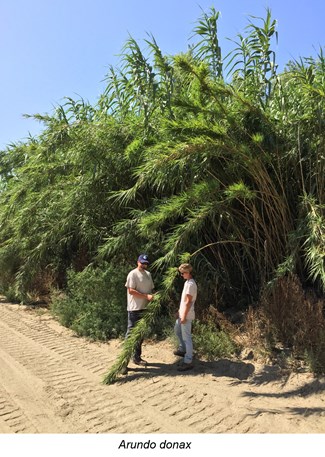 Earth Day will be celebrated on April 22. Won’t you join the Orange County Water District and others around the globe to protect the environment?

For more than 80 years, the District has made protection of the environment a major part of its efforts. OCWD has dedicated more than 1,100 acres of land for environmental preservation and invested millions of dollars for conservation.

The Orange County Water District not only helps wildlife, it ensures a reliable supply of water from the groundwater basin and protects water quality. Read More… 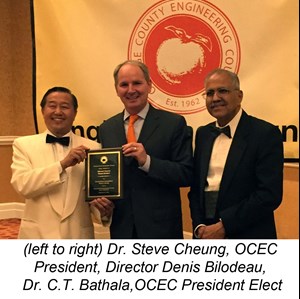 The Groundwater Replenishment System Initial Expansion received an Engineering Achievement Award from the Orange County Engineering Council (OCEC). The presentation was made February 27, 2016 at the OCEC Annual Honors and Awards Banquet, celebrated this year in Anaheim, Calif. OCEC is an umbrella organization of the American Society of Civil Engineers (ASCE).

OC Water Summit Set for May 20 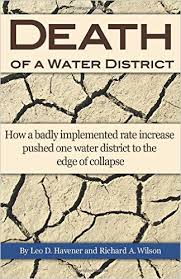 “Death of a Water District” author Richard A. Wilson will discuss steps elected officials take — or don’t take — that ultimately harm their city or agency. He is one of several experts who will address the physical, financial and political challenges faced by leading local-government agencies during their efforts to provide reliable water service at an affordable cost.

Registration is now open and sponsorship opportunities are available. Visit www.ocwatersummit.com to sign up.

Desperate Times: The Making of SGMA

The State of California is progressive 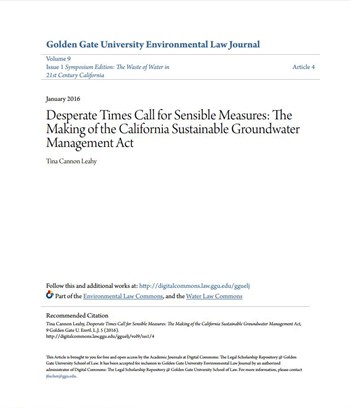 when it comes to environmental legislation and standards. Yet, it was the last state in the nation to adopt groundwater regulation. The Sustainable Groundwater Management Act (SGMA) passed in 2014, but its creation, and certainly its need, could be said to have begun as far back as 1903 when the Supreme Court put boundaries on groundwater withdrawal in Katz v. Walkinshaw.

In Desperate Times Call for Sensible Measures: The Making of the California Sustainable Groundwater Management Act by Tina Canon Leahy, the Orange County Water District and the Water Commission Report were given credit for demonstrating how the state could manage its precious resource. In addition, the noteworthy document covers in detail how “The… authority was already there. But in the end it took another exceptional drought, a visionary Governor, and an extraordinary coalition to come together and make SGMA a reality.”

OCWD worked closely with Ms. Leahy and other staff working on the legislation to ensure that special act districts already managing groundwater, like OCWD, would be allowed to have the option to continue managing as they had been or to take on the powers and authorities granted to agencies formed under the Act. 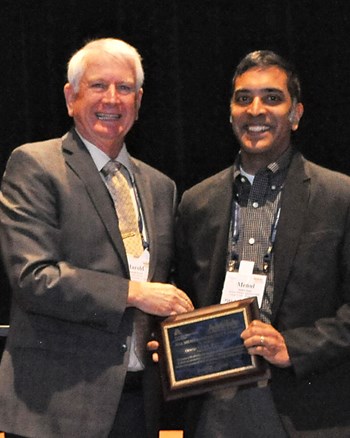 The award recognizes an outstanding water/wastewater facility that uses any membrane technology with high efficiency in an environmentally friendly approach. It was presented “In appreciation of their dedication to the education of their operating staff and the public regarding the benefits of this innovative technology.” A joint project of OCWD and OCSD, the GWRS is the world’s largest water purification system for indirect potable reuse and helps increase north and central Orange County’s water independence by providing a locally controlled, drought-proof supply of high-quality water. 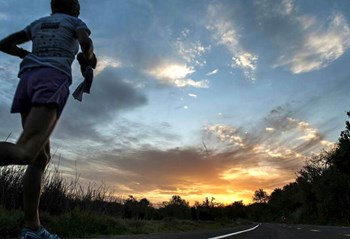 Childhood cancer, the second leading cause of death in children ages 1-14 years, exceeded only by accidents, has slowly increased by 0.6 percent per year since 1975, when cancer registration began in the United States. An estimated 10,380 new cases are expected to occur in 2016 and 1,250 will die that same year.

Orange County Water District Community Outreach and Education Coordinator Becky Mudd is using her pastime of running to give meaning to the families and children that have been affected by this malignant disease. Becky Mudd’s Run for Gold brings awareness and funding to the fight against pediatric cancer.

Running the equivalent of a marathon each day, Becky plans to run more than 450 miles over a 14-day period (May 28-June 10) in Utah to raise funds for the Pediatric Cancer Research Foundation (PCRF). Read More… 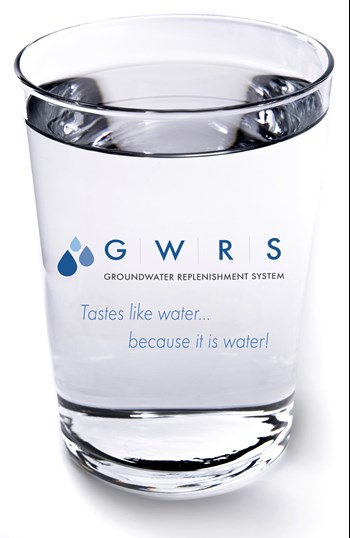 After learning about the advanced treatment processes used to make pure, safe water for drinking, 89 percent of people are more willing to use reused water, according to a statewide survey released by Xylem Inc. The survey found that 76 percent of respondents believe reused water should be a long-term solution for managing water resources, and not just during droughts.

Nearly half of those surveyed are very supportive to use reused water as an additional local water supply. Forty-two percent are very willing to use recycled water in their everyday lives. According to Xylem Senior Vice President Joseph Vesey, “We conducted this survey in an effort to better understand public perception about recycled water…With overwhelming support from the public, California is well-positioned to lead the U.S. in accelerating the availability and acceptance of recycled water.” Read More…

As part of its standard to forge and maintain long-term, positive and proactive relationships with members of the local community and greater water industry and to be transparent about its operations and programs, OCWD board members and staff speak regularly before groups and at events. We participated in the following during February:

• Recharge Planning Manager Adam Hutchinson participated in a planning meeting for the 9th International Symposium on Managed Aquifer Recharge to be held in Mexico City in June. Adam was invited to Mexico City at no cost to the District to discuss the meeting format and content with senior water officials in the Mexican government, who are scheduled to update their groundwater laws this fall.

• KTLA morning news: From Toilet to Tap in a Matter of Minutes by Rich DeMuro

• Huntington Beach Independent: How would desalinated water be distributed? Water district decides to look at 5 of 8 options by Anthony Clark Carpio

• Film students from Chapman University interviewed Principal Engineer Sandy Scott-Roberts about the GWRS and filmed footage of the plant for an upcoming project. 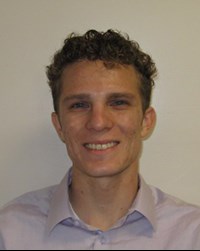 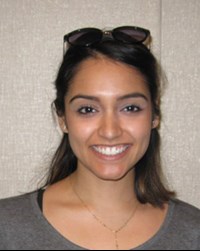 Congratulations to Kevin Greene on his recent retirement from OCWD after 10 years of service.

Thank you to the more than 400 guests that toured OCWD’s facilities in February: 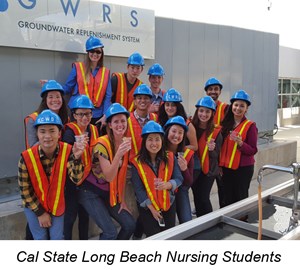