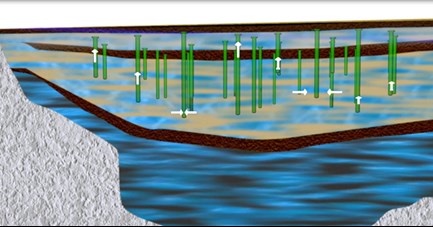 Every year, the District’s retail agencies (Producers) are allowed to pump groundwater based upon their water needs and the projected groundwater supplies available. OCWD controls total annual groundwater pumping with the Basin Production Percentage (BPP) and the Basin Equity Assessment (BEA).

OCWD sets the BPP in April and it goes into effect in July. This year’s BPP was maintained at 75 percent. This was due primarily to lower water demands as Californians are conserving, plus OCWD’s groundwater management, including additional stormwater capture and the 100 million gallons each day provided by the Groundwater Replenishment System. Groundwater is about half the cost of imported water. This translates into a cost savings for water retailers and end-users, as the amount of costly imported water that must be purchased decreases.

The BPP is calculated by dividing projected groundwater supplies by projected total water demands. The BPP is set annually and has historically averaged about 70 percent.

Any retail agency, farmer, business, or individual that pumps groundwater pays the Replenishment Assessment (RA) for each acre-foot of water extracted. The RA provides most of the revenue OCWD needs to manage the groundwater basin.

Groundwater producers that pump water above the 75 percent BPP pay the RA plus a BEA charge, which makes the cost of the groundwater equivalent to purchasing imported water.

By imposing the BEA rate, OCWD incentivizes the retail agencies to only pump groundwater up to the BPP.

This unique strategy to manage the basin meets local water demands while protecting the basin from subsidence and salt water intrusion.