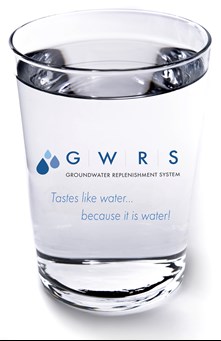 Advanced purified water, such as that produced by the Orange County Water District (OCWD) and Orange County Sanitation District’s (OCSD) Groundwater Replenishment System (GWRS), is becoming a more common source for water agencies as they diversify their water portfolios. It has been scientifically proven to be clean and healthy and meets and exceeds state and federal drinking water standards.

New legislation to allow the bottling of advanced purified water is an excellent means of allowing Californians to experience how cutting-edge technology is being used to purify treated wastewater.

Even though GWRS water at the plant is superior to state and federal drinking water standards, California bottled water regulations have not caught up with recognizing reclaimed water as a source for drinking water. So, even though GWRS is pure water, we are not allowed to bottle it.

OCWD and OCSD, with WateReuse California, are supporting Assembly Bill 2022, authored by Assemblymember Richard Gordon (D-Menlo Park), legislation that would authorize the bottling of potable reuse demonstration drinking water for educational purposes and to promote water reuse. The proposal will allow water agencies in California to bottle samples of advanced purified water and establishes bottling, labeling, handling, quality, and treatment requirements for bottled potable reuse water. The samples will only be able to be distributed after testing is performed to demonstrate that they meet or exceed federal and state drinking water standards.

Of all the freshwater in the world (excluding polar ice caps), 95 percent is groundwater. Forty-four percent of the American population depends on groundwater for its drinking water supply, according to the National Groundwater Association (NGWA).

Groundwater becomes even more important during droughts as rivers, streams and large bodies of water dry up and surface water becomes scarce. The Orange County Water District has been managing the Orange County Groundwater Basin successfully for more than 80 years. District personnel are experts in the geology of the basin and the area that surrounds it. OCWD has learned to put back as much water as is taken out to ensure the health of the basin, protecting it from seawater intrusion and subsidence. In addition, staff has been called on for its expertise in developing and implementing important water-related legislation that includes California’s Sustainable Groundwater Management Act.

Join the Orange County Water District, agencies, schools, groups, and individuals around the country who will celebrate National Groundwater Awareness Week, March 6-12. Well into its second decade, the week spotlights the importance of groundwater and offers ways to get involved to protect this vital natural resource.

Leading the way in water reuse, OCWD and OCSD have partnered on water recycling projects for more than 40 years. In 2008, they implemented the Groundwater Replenishment System (GWRS), the world’s largest indirect potable reuse project of its kind that currently produces 100 MGD, enough water for 850,000 people annually. OCWD and OCSD have extensive expertise in permitting, designing, constructing, and operating the GWRS, which will serve MWD and LACSD well as they develop a project of their own. Read More… 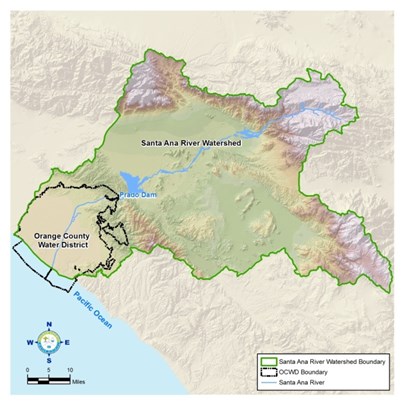 The funds will be used for a multi-year program to jointly develop shared facilities at several groundwater basins that will improve the reliability of water supplies in the region. Read More… 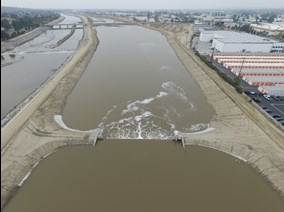 ty and the Orange County Water District (OCWD; the District) did everything it could to capitalize on rains to increase local water supplies. The District has captured more than 4.8 billion gallons (15,000 acre feet) of stormwater from the January rains, enough water to serve 133,000 people annually.

OCWD uses this as one source of water to fill the groundwater basin it manages. Other sources used to replenish the Orange County Groundwater Basin, which provides 2.4 million people in north and central Orange County with 75 percent of their water supply, include natural incidental recharge, recycled water, Santa Ana River water, and imported water. Read More…

Pictured: Water flows from Weir Pond 2, over the newly constructed Weir 2, and into Weir Pond 3. With the completion of the Weir Pond Rehabilitation Project, the District was able to divert Santa Ana River water into the recharge ponds during this winter’s storms 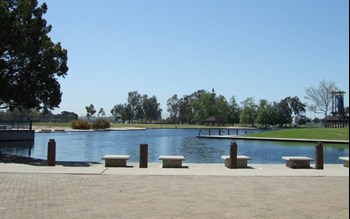 At the workshop, the Board of Directors eliminated options 1A, 1B and 1C from future consideration and directed staff to continue to explore the remaining five distribution options. A workshop to further evaluate and discuss the remaining options will be held on March 2, 2016 at 5:30 pm in the OCWD board room, located at 18700 Ward Street in Fountain Valley. Read More…

Drinking water throughout Orange County is monitored and tested vigorously, ensuring state and federal regulations are met. About 2/3 of that drinking water comes from one local groundwater basin. Plumes of industrial chemicals created by past manufacturing are spreading and threaten to impact the basin. Five water wells have already been removed from service. OCWD is working with regulators, parties involved and community stakeholders to contain and clean up the basin and prevent more wells from going out of service. The United States Environmental Protection Agency (USEPA) is taking the lead in the North Basin. The Department of Toxic Substance Control (DTSC) and the Regional Water Quality Control Board (RWQCB) are taking the lead in the South Basin. As part of its commitment to transparency, OCWD provides information on a regular basis to inform readers about ongoing efforts for these and other potential threats. In addition, staff provides monthly updates at publicly agendized board meetings.

OCWD recently hosted a meeting of potentially interested parties in the North Basin. During that meeting OCWD asked that a steering committee be formed to comply with the U.S. Environmental Protection Agency’s (EPA) call for voluntary performance of a North Basin remedial investigation and feasibility study (RI/FS). Following that meeting, Northrop Grumman reached out to OCWD to explore the possibility of working together in a voluntary arrangement to move the project forward. Both entities responded separately to the EPA invitation indicating a desire to spend time working together to see if a mutual agreement between OCWD and one or more private parties can be formed to do the necessary work.

OCWD staff also continues to work on the permitting, design and installation of a pumping system in the existing EW-1 extraction well near State College and Kimberly Drive in Fullerton.

Staff continues with the NCP-compliant RI/FS work in the South Basin. The field sampling plan is nearly complete and includes the installation of several data-gap monitoring wells. A preliminary design of a pilot study was also completed. These work plans and designs will soon be presented to the OCWD Board of Directors for its consideration. OCWD staff is keeping the Irvine Ranch Water District and water utilities of Santa Ana and Tustin apprised of its work in the South Basin and is exploring ways to cooperate more closely in its implementation. 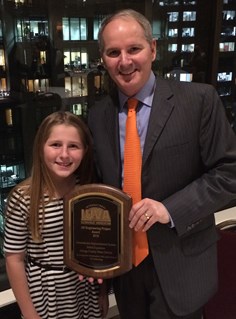 The Orange County Water District received the UV Engineering Project of the Year Award from the International Ultraviolet Association (IUVA). The presentation was made at the 2016 IUVA World Congress held recently in Vancouver, BC. This award recognizes an exemplary engineering project involving UV applications in operation. Each nominated engineering project was reviewed for development of UV research and technology and honored for innovation, excellence, and its impact on society.

Pictured: Director Denis Bilodeau and daughter Simone with the UV Engineering Project of the Year Award from the International Ultraviolet Association.

As part of its standard to forge and maintain long-term, positive and proactive relationships with members of the local community and greater water industry and to be transparent about its operations and programs, OCWD board members and staff speak regularly before groups and at events. We participated in the following during January:

• Board President Cathy Green moderated the “Water Desalination Technologies and Financing” panel at the 2016 VERDEXCHANGE Conference. 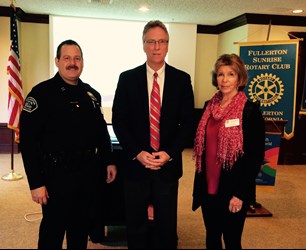 • Cathy Green, General Manager Mike Markus and Executive Director of Planning & Natural Resources Greg Woodside attended a meeting at Prado Dam with stakeholders from the Orange, San Bernardino and Riverside Flood Control Districts and the U.S. Fish and Wildlife Services to brief Major General Jackson of the U.S. Army Corps of Engineers and Congressman Ken Calvert about the various projects and initiatives involved at Prado Dam, which include water conservation. Also attending were Brigadier General Toy and Colonel Gibbs.

• Associated Press (found in a number of papers including US. News & World Report): As rain pummels California, some see a way to fight drought by Elliott Spagat

• Eco-Chick: Recycled Water is the Future. And No It’s Not Gross—Here’s Why by Matt Weiser

• Next City: How California Cities Can Capitalize on El Nino’s Rains by Jen Kinney

Employee of the Year—Pedro Barrera

Maintenance Technician Pedro Barrera was honored by the Board of Directors as OCWD Employee of the Year. Pedro was praised for keeping his upbeat can-do attitude while taking on the duties of two Utility Technicians during a staff shortage. He did it all with a professional and courteous manner. No matter the circumstance, he is always cooperative and helpful. Pedro received a promotion to Maintenance Technician I at the end of last year and has been with the District for five years. Congratulations Pedro!

Service Awards Given to Unprecedented Number of Employees 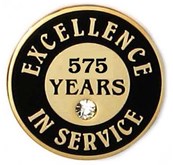 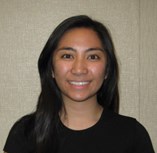 Congratulations to Arthur Tabata on his recent retirement from OCWD after 28 years of service. 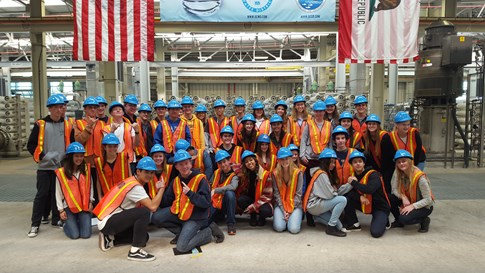 Thank you to the more than 200 guests that toured OCWD’s facilities in January:

Tours of the GWRS were given to the delegation from Guozhen Environmental Group (China) and a Chinese delegation in association with MWH Global, members of Moulton Niguel Water District and Junior Ambassadors-Civic Leadership Program/City of Westminster, attendees of the International Symposium on Potable Reuse and attendees of the National Water Research Institute/National Science Foundation direct potable reuse workshop, members of the Association of California Cities Orange County and Orange Canaan Presbyterian Church, students from Dana Hills High School (pictured), and members of the public.

If you would like to be removed from OCWD’s Hydrospectives, please send an email to info@ocwd.com to process your request.