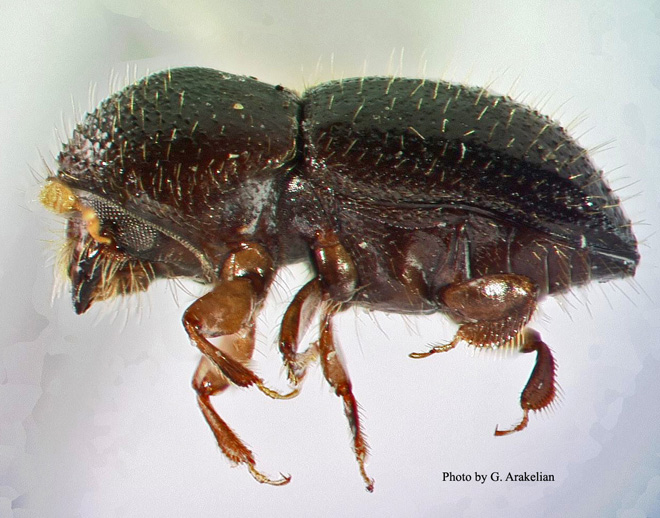 non-native invasive beetles, tree borers, and fungus farmers that are in the Prado Basin and threaten the forest. These beetles are tiny, the size of a pin head, but infest the trees they attack in such numbers and so thoroughly that previously healthy trees die quickly. They introduce and spread fungus in the vascular system of the tree, impeding the tree’s ability to transport nutrients and water.

First recognized in 2012 in Southern California, arboreta, city landscaping and avocado groves were the first victims. The beetles have now been observed in 50 species of trees from Ventura to San Diego County and unfortunately attack the healthiest specimens. The beetles are native to Southeast Asia probably arriving here in the infested lumber of shipping containers.

Everyone is deeply concerned about the potential for devastation of the river forests, particularly Prado. For example, the riparian forest canopy was destroyed in the Tijuana River Valley in less than a year from discovery of the problem there; the many tens of thousands of willows and cottonwoods on the Tijuana River are dead or dying. Natural Resources staffs are working with regulators and researchers to trap and experiment with potential control techniques. Unfortunately, biological control via a non-native parasitic wasp is probably the only long-term solution but will take years to study and approve.